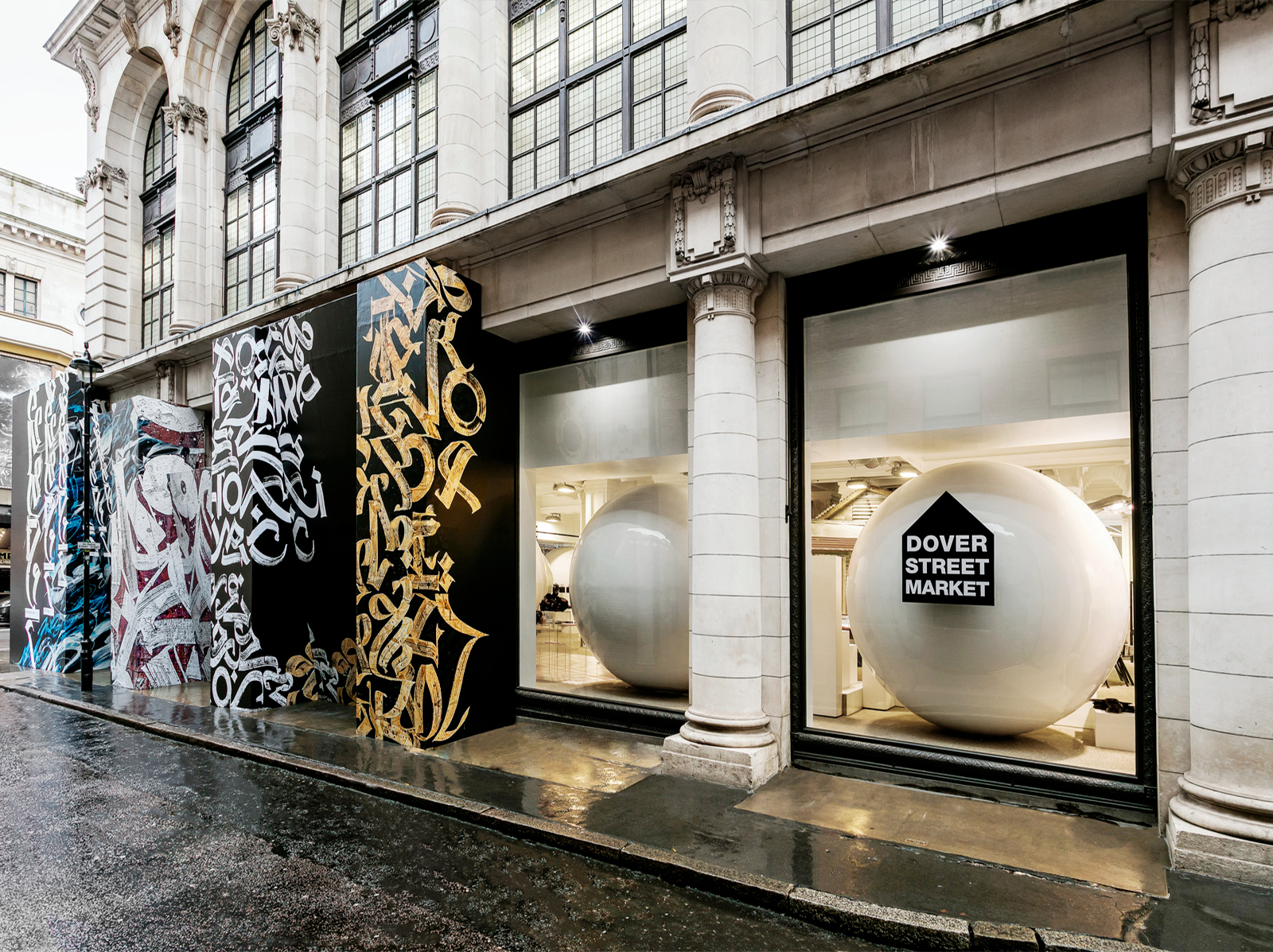 In the end of November this year the Russian-born artist Pokras Lampas unveiled his monumental printed installation created on the facade of Dover Street Market in London. Lampas is one of the world’s most famous calligraphy artists, who became famous as one of ambassadors of the unique fusion of graffiti and calligraphy called “Calligraffiti.”
This technique caught the attention of the famous minimalist fashion designer Rei Kawakubo. Kawakubo has already been known for he appreciation of Russia and Russian art and she openly declares her interest and support of the Russian world of design. Lampas and Kawakubo collaborated on the series of installations for Dover Street Market’s many international locations which include not only London, but also Beijing, New York and Tokyo. RA+C correspondent Anna Kanunikova met with the artist to talk about his practice. (Source)
Anna Kanunikova: Pokras, your project in collaboration with the CDG brand is a series of large installations in different cities of the world. Tell me, please, how this project started and why you got involved in it?
Pokras Lampas: This project was initiated by Rei Kawakubo. She invited artists and designers to create a set of graphics. They then were used to create interesting books, postcards or collages, which were posted all over the world. For this project Kawakubo worked with a number of globally acclaimed artists, such as the French photographer and street artist JR, and also collaborated with DAU Magazine. This year CDG focused on typography and calligraphy. They reached out to me as the major representative and innovator of this style and asked to create the work over the period of 6 months. At first the graphics were used for various purposes, such as Fashion week, and later turned into the large-scale installations which are now placed all over the world. 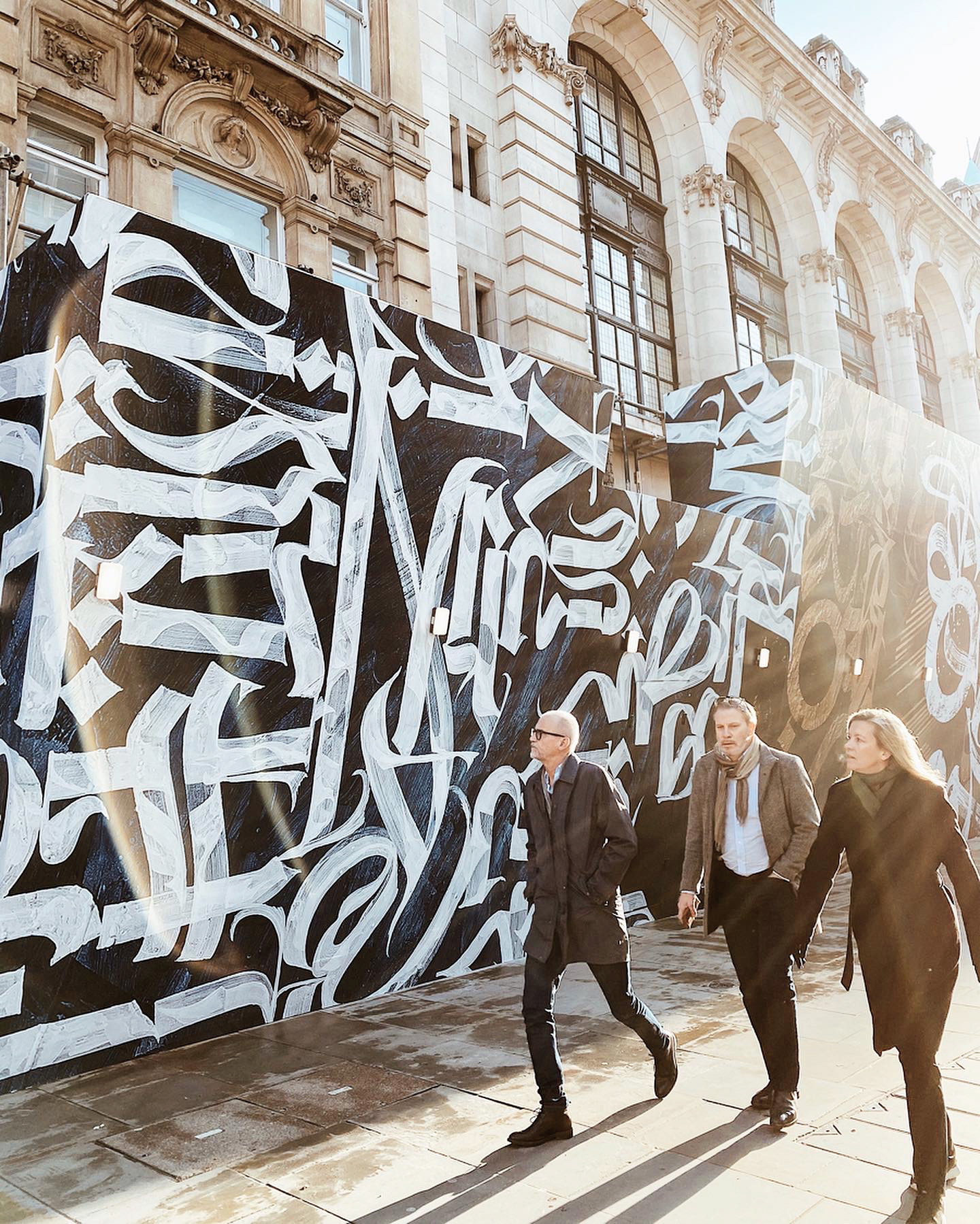 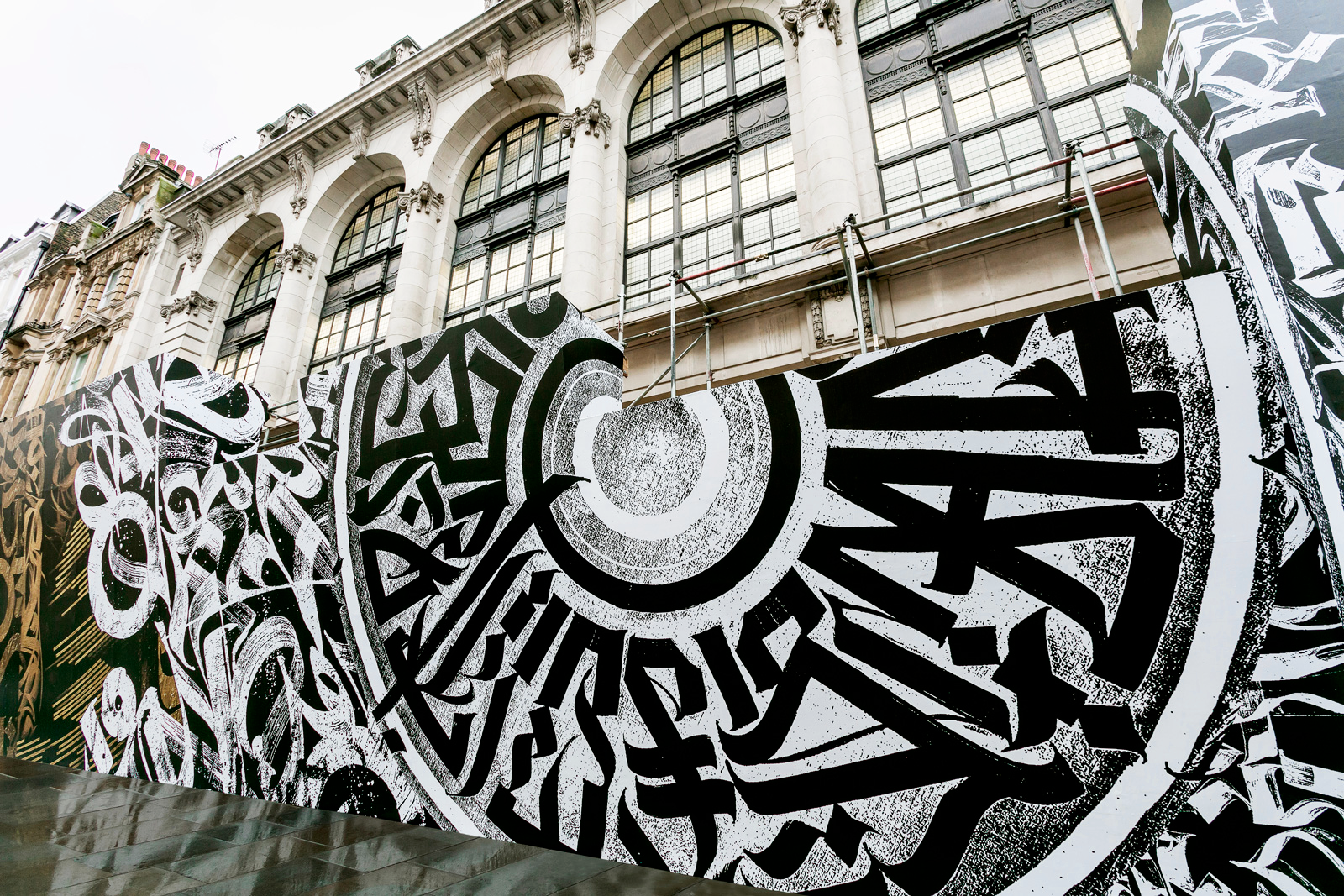 Anna Kanunikova: Is the London installation the first one in this series?
Pokras Lampas: No. The first installation appeared in Tokyo and was followed by the works in Beijing and New York. The London installation was unveiled on 29 November simultaneously with another one in New York. The final work in the series was created in Paris.
Anna Kanunikova: Are they site-specific? What is the process of their creation?
Pokras Lampas: Unfortunately, it is impossible to create these works on site due to their scale and our tight schedule. The work was first made on canvas and then transferred into the digital format. It was later developed into the series of canvases which was used to create collages printed for the installation.
Anna Kanunikova: Prior to that you have also worked with several famous brands, such as Fendi. What are the specifics of cooperation with CDG and Rei Kawakubo?
Pokras Lampas: I really liked their message and values. When we have just started, I asked for the history of their collaborations and ideas for texts that we could write together.  Among other things there were two ideas that stated: ‘Wear your freedom’ and ‘Wear with feelings ‘.
These seemed to me the perfect way to unite art and fashion. Many of their texts in general speak about freedom, feelings, creativity and I think these ideas are very important and they should be communicated through completely different formats and projects. Another important factor was freedom of expression: Rei and her team not even once edited what I wrote. On the contrary, they were very open to what I was doing, they always gave new interesting meaning to my work and as an artist I was excited to observe how a designer reinterprets and sees my work. 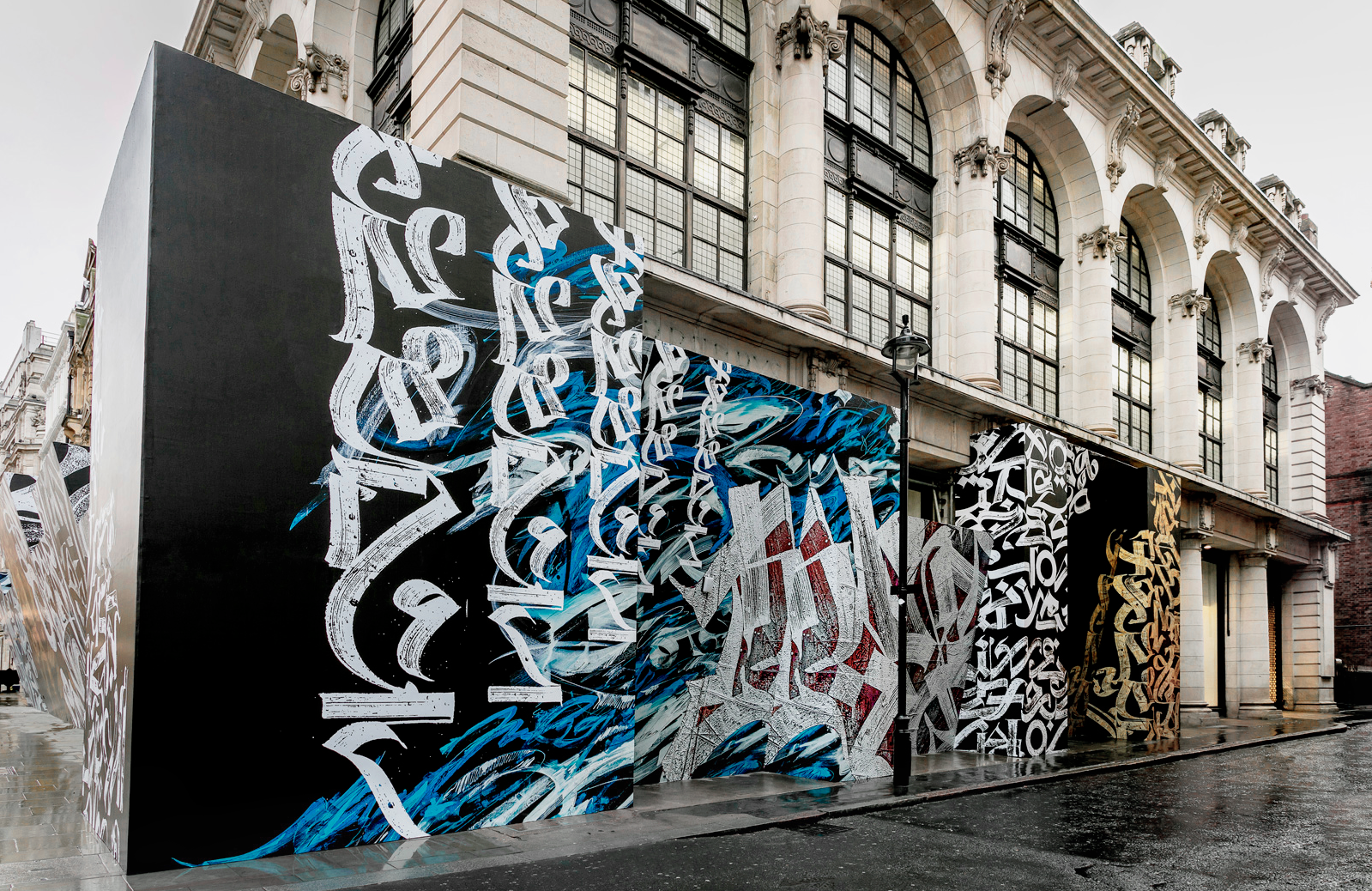 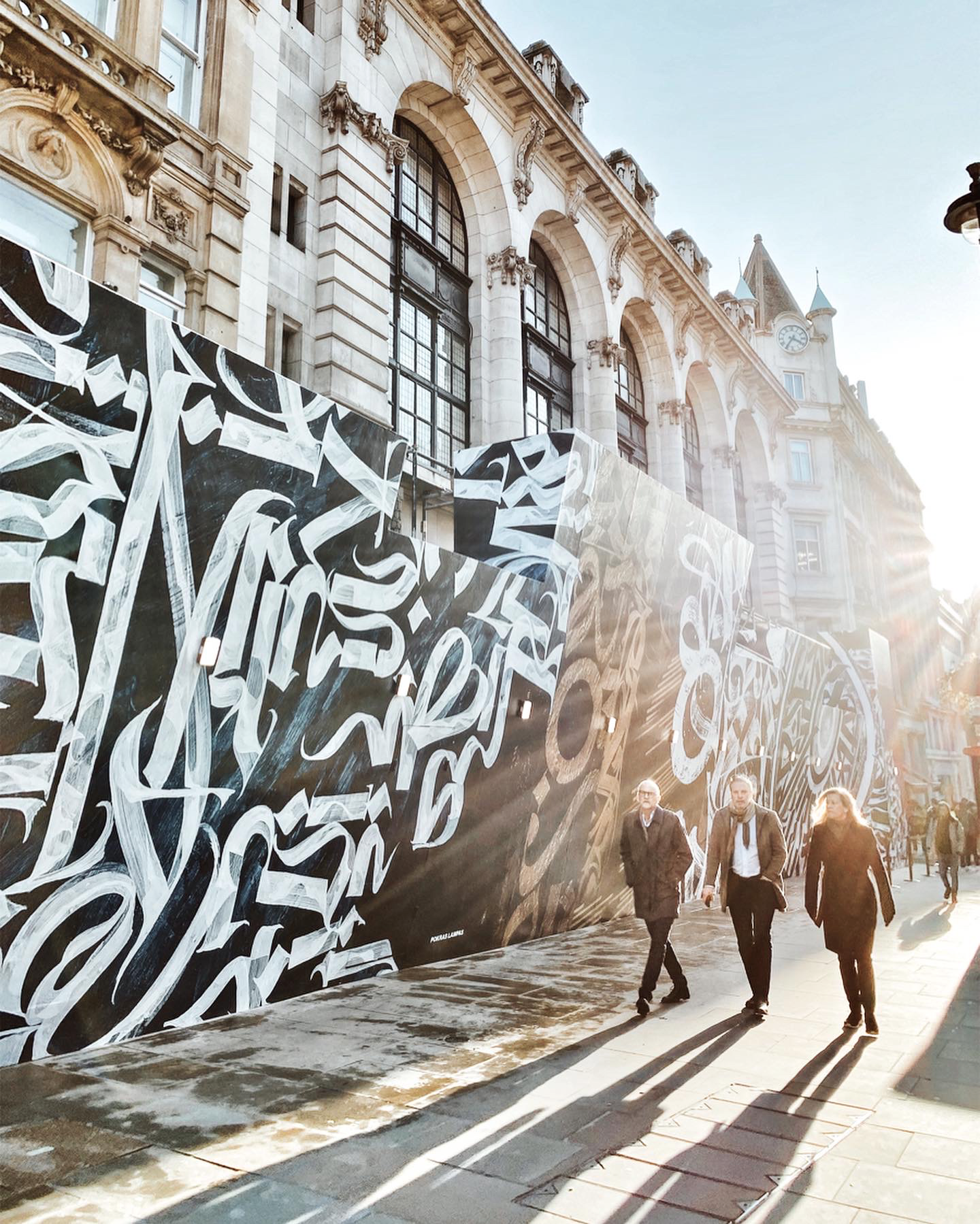 Anna Kanunikova: Is this kind of freedom of creativity a rare phenomenon in collaborations?
Pokras Lampas: From my experience I would say it is not particularly rare. I am interested in expressing myself in one or another form through the collaborations. My main requirement in such projects is not to be limited artistically. CDG is a well-known both for their stores and their unique style and statements. When they give such credence to me as an artist, I value the importance of it for my work.
Anna Kanunikova:Your every work has their peculiarities and there is often some hidden meaning and features. What were the key meanings in this series of works?
Pokras Lampas: Perhaps, the most important feature is that I maintain my main concept – I mix different cultures through calligraphy, and the writing presented in our collaboration highlights this. There is no single pronounced language or any cultural identity with which this language can be associated. This, in fact, is a test of whether this work can look relevant both in New York and in Paris and Tokyo, in world capitals, where the agenda of multiculturalism is the most relevant. I think that it is precisely the power and scale of these cities that emphasize these works.
THANKS for WATCHING. \  С П А С И Б О за  П Р О С МО Т Р .
Don`t forget to support this project by share, comment and like. All your feedback is greatly appreciated.
If you are interested in publishing of my artworks & projects, send your requests on hello@pokraslampas.com
Photo credits: DOVER STREET MARKET LONDON. 2019.
Also, here is some social media networks: MY  I N S T A G R A M    \    Interview RA+C: S O U R C E .